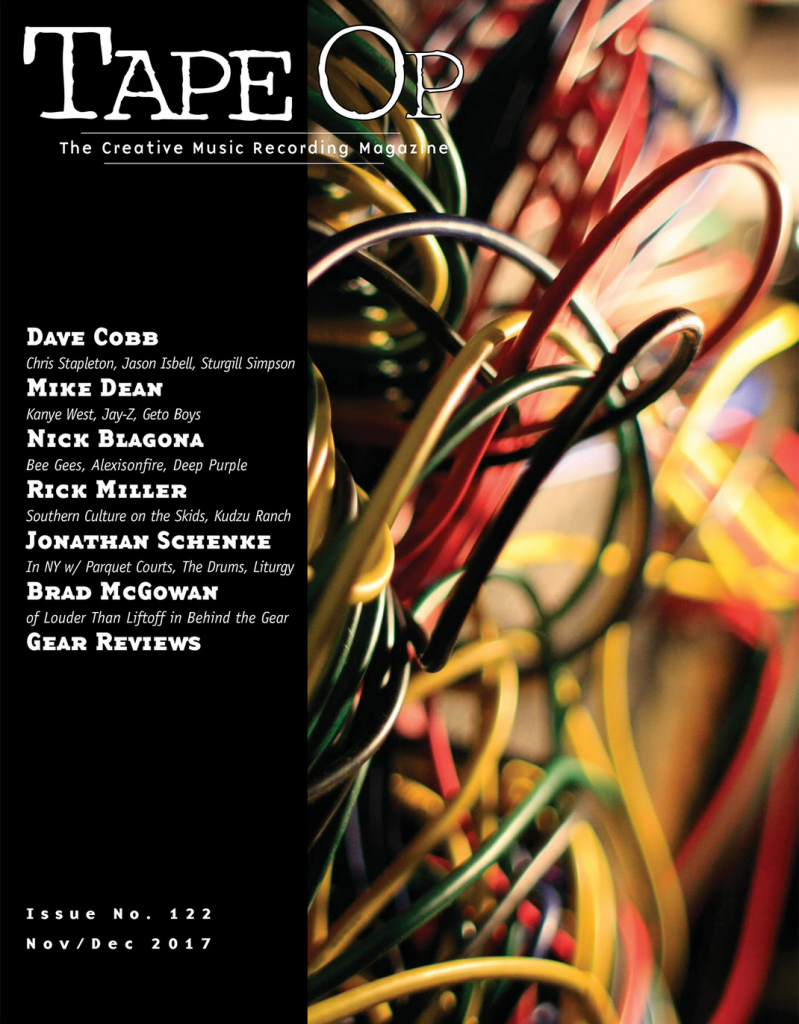 We recently did a session here at Panoramic House with Jerry Harrison (Talking Heads, Live) producing a great band called Le Butcherettes. Jerry has a studio near us with a mix/edit room and a separate tracking room; and both rooms have Burl Mothership converters [Tape Op #84] tailored to each room. Jerry has had his Burls for years, and he told me, “I bought them so I’d have something different from a lot of other producers and studios; and I’ve really come to love the way they sound, and I really don’t like working in studios without them.” So naturally, Jerry wanted to bring one of his Motherships to Panoramic and interface it to our Pro Tools HD rig, but unfortunately, it did not have enough A/D channels for the tracking session here. Coincidentally, Bristin Millard at Burl had recently asked us if we wanted to review the new BAD8 daughtercard for the Mothership. The BAD8 offers eight channels of A/D conversion over the four channels in the first-generation BAD4 cards. Will Kahn from Burl brought us three BAD8 cards, and it took Will about 45 minutes to swap out some components on the Mothership’s BMB1 motherboard, set the jumpers on the BAD8 cards, and test the system. And then, we were up and running. Following below are Jerry’s comments on the BAD8. –JB

When we got to work, one of the first orders of business was to compare the two converters. The BAD4, for those who are unfamiliar, has individual transformers on each of the channels, and the size of the metal cans around the transformers is one of the reasons for the four-channel limitation. These transformers are an important component of the Burl sound, which I would characterize as fat, coherent, and musical. The BAD8 has the same transformers, without the cans around them, so eight of them can now fit on the card. We wondered whether the naked transformers would still give us the sound that we love. There are differences, but they are minor; the BAD8’s sound is a bit clearer, and the BAD4’s is a bit fatter. However, the differences we heard were slight enough that we didn’t feel the need to do complicated repatching to choose one converter over the other for the instruments we were recording. Also, the BAD8 has been updated with a modern ADC chip and a revised analog section to support this newer chip, so I suspect the minor differences in sound have more to do with this than the removal of the transformer cans. One of the benefits of the BAD8’s new chip is that conversion latency is now 7 samples, compared to the BAD4’s 66 samples. [Calculating millisecond latency from number of samples: 7 vs. 66 samples at 48 kHz is equivalent to 0.15 ms vs. 1.4 ms, and 0.08 ms vs. 0.7 ms at 96kHz. –AH] If you are adding BAD8 cards to a system with BAD4 cards, there are jumpers you can set to match the BAD8’s latency to the BAD4’s. If you split their use (e.g., dedicate the BAD4 to main inputs and the BAD8 to inserts), one could leave them configured for their native delays. It’s also worth noting that changing the latency jumper also changes the filter settings for the card, and Burl recommends 7 samples as the optimal setting for the BAD8. Minor differences aside, the Burl engineers have done an impeccable job of creating an 8-channel ADC card which retains their signature sound. With that said, the BAD4 will still be available for purchase, unaltered, and Burl plans to support the BAD4 indefinitely.