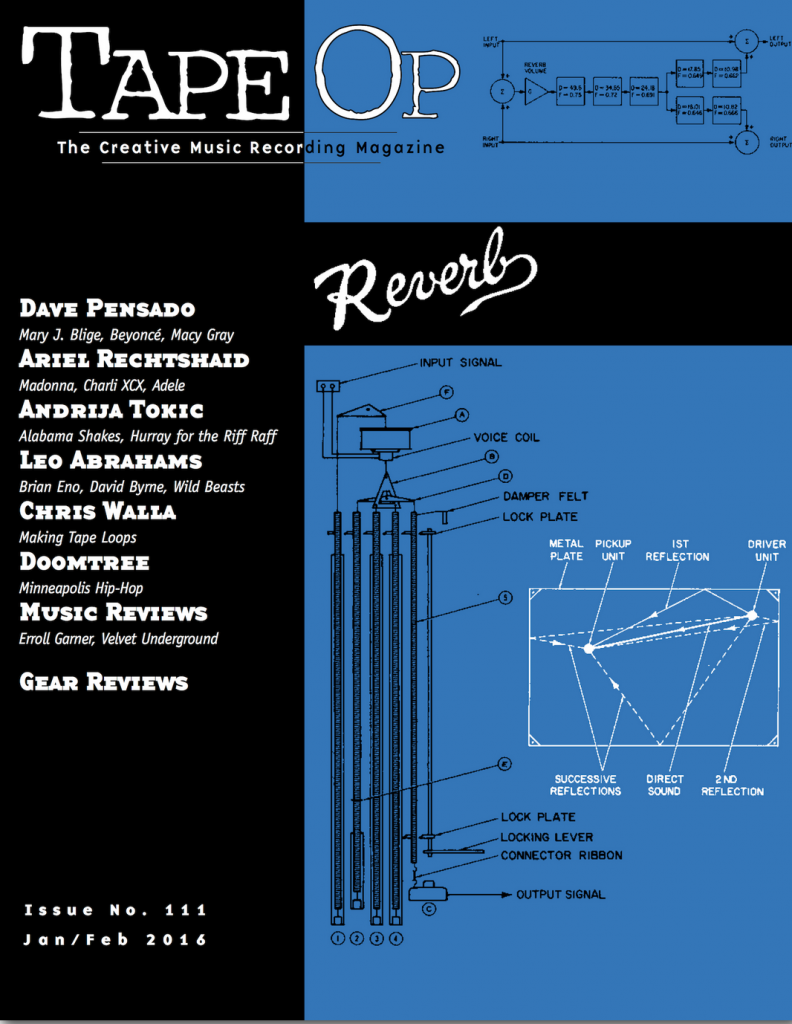 Burl Audio is already well known and loved for its two-channel B2 Bomber AD/DA converter [Tape Op #79] and multi-channel B80 Mothership [#84], but maybe less so for its boutique all-analog audio gear. A while back, I bought a pair of Burl Audio B1D 500-series mic preamp modules on a recommendation from Dan Physics at Brooklyn’s Audio Power Tools. I was just beginning to dip my toes into the 500-series waters, and I wanted some great mic preamps to commence filling a lonely 11-space rack. I knew these would be solid. I also own the Burl B32 Vancouver summing bus [Tape Op #99] and have used a variety of other Burl products over the last couple years. More recently, Burl sent me a pair of B1 preamps to try. Like everything Burl makes, the build of these preamps is rock solid. The modules are heavy, the knobs and pots have a great resistance, the buttons latch in a satisfying way, and the overall designs simply scream quality. The brand name truly matches the products in every way.

The front panels of the B1 and B1D are laid out identically, with input gain and output level knobs, a 1/4” DI jack, and the typical buttons for low-Z input, phantom power, polarity reversal, and input pad. A single LED indicates the presence of signal, varying from green to orange to red in color, depending on the signal level. Inside, the two models are identical, save for their output transformers. The B1D sports the Burl BX4 iron-core output transformer and the B1 the BX2 nickel- core. With the D standing for “Dark,” the iron version has a touch more meat on the bone, contributing to this preamp’s warmth and overall massiveness of tonality. That said, the B1 is far from anemic. It too has great depth, dimension, and a richness all its own.

I have used the B1D extensively on guitar and bass, but using it only on these instruments would be selling it way short. Its low end is extended and warm, but this is not to say it lacks any top end. The B1D reacts to high frequencies in quite a lovely manner, without adding any harshness. When driven hard, it saturates in a beautiful way, holding up where other preamps travel into unusable territory. I love what the B1D does to acoustic guitars, keyboards, and vocals. It is easily one of the most across-the-board useable mic preamps I’ve tried. Moreover, its big rich tone, along with its ability to be driven into euphonic saturation, makes it a great choice for drums. I frequently use it on kick and snare, but only because I have just two; I’d love to have more of them to use on the entire drum picture. Users who have access to a limited mic selection will be thrilled with the pairing of a simple SM57 and the B1D on a variety of sources. Snare, electric guitar, vocals, and even acoustic guitar sound great with this pairing.

I leaned heavily on my two B1Ds for Wurlitzer and Rhodes duties on a recent session for NYC- based artist Andrea Wittgens, with one as the DI and the second on a Vox AC30. I liked being able to lean on the gain to dial in rich, warm tones with some gentle saturation. The B1Ds filled the midrange spectrum, where electric guitars would otherwise function, with a nice addition of color.

Because I am so familiar with the tone and sound of the B1D, I thought a side-by-side comparison of the two preamp models on a few sources would be worthwhile. I started with an SM57 on a small Vox tube amp, and played a pass on a Telecaster, recording first through the B1D and then doubling the part through the B1, after matching the settings on the two preamps. Far from a scientific test, it was good enough for clearly hearing the differences in these two models. The B1 was a little “cooler” sounding (as in temperature), with a tighter low end, and perhaps a touch more forward. I did similar tests on vocals as well as with bass plugged directly into the preamps. Bass through the B1 had a little less meat than through the B1D, but still remained full and focused. With both models, I especially liked the way bass, guitar, and vocals sat in the mix with less need for top-end EQ.

Because of the B1‘s nickel-core transformer, I found it to be a more suitable choice when I’m after a less “leathery” and more pristine sound. It is great for acoustic guitars and vocals and other instruments that might need a nip and tuck in the low frequencies. I liked turning its input gain all the way up and adjusting its output level for sources like acoustic guitar, where the instrument is driving the song. Used in this way, the B1 offers some nice harmonic saturation and is closer in tone to the B1D.

The B1 and the B1D are certainly siblings. One is an Olympic swimmer, and the other plays rugby in a three-piece suit. Both are incredibly good at what they do and will serve their owner in many scenarios. If you like all the typical verbiage of trying to put sonic nuance into words, these Burl preamps get all the good adjectives. They really have so much of what we like about all the “classics,” while maintaining characters all their own. They are quiet and can be clean, but love to play dirty when asked. Both pair well with a variety of mics; and with a ton of gain, use with ribbon mics is not an issue. These Burl preamps have ended up on every record I have made since the day the B1Ds were put in the rack, and I always travel with them when not working in my own studio. They just work and bring a bit of that magic to everything they touch.

You can’t go wrong with either of these preamps. They both bring the source alive in the best of ways, and they do it with their own unique sounds. Moreover, you can run your line-level mix through these preamps, adjusting warmth and color to taste. You will love the extra je ne sais quoi this adds to your music. Whether you are buying your first preamps or you are adding to an already established collection, I would not hesitate to recommend the Burl Audio B1 and B1D. They will serve you well for anything you throw at them.

Buy From Sweetwater
$875 street each; www.burlaudio.com
Geoff Stanfield is at www.geoffstanfieldrecording.com