Born on May 26th 1926 in East St. Louis, Miles Davis has been named The Greatest Jazz Trumpeter of all time. Davis grew up in an upper-middle class home with a father who was a dentist and a mother who taught music. As he grew older, he began playing trumpet with St. Louis jazz bands, and eventually, his fathe

r sent him to begin schooling at New York Julliard School of Music to continue building his skill-set.

After arriving in NYC, Miles met his new roommate, alto saxophonist Charlie Parker. Davis then began playing in his quintet during the 1945 Savoy sessions, beginning the bebop movement. He eventually dropped out of Julliard and began playing with Benny Carter, Billy Eckstine, Chales Mingus and Oscar Pettiford.

Although he didn’t finish school, the skills Davis had were extraordinary. He had a keen ear for unique phrasing, tone and ensemble sound. His direction changed to a style that was more introspective in 1949 and in early 1950. He began working with Gil Evans on the Birth of the Cool, playing with a nine-piece band. His recordings with muted trumpet helped him create a sound that helped him get noticed in mainstream music.

In 1949, Miles Davis became addicted to heroin. Drugs were everywhere during this time period. Although he continued to perform and record, his addiction hindered the growth of his career until he finally became clean in 1954. After 6 years of of addiction, Davis decided to form a new group called the Miles Davis Quintet. With bassist Paul Chambers, pianist Red Garland and premiering John Coltrane with his tenor saxophone, the group became known as the decade’s premier jazz group. 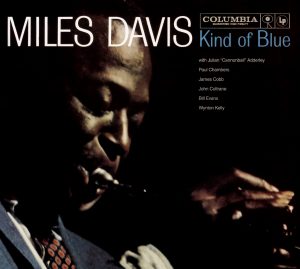 Wanting to capture the musician’s impulsive nature and capture it on the first try, Davis and Evans wrote up some basic compositional sketches so the musicians could use them as outlines. “Freddie Freeloader” was the first song to be recorded and they got it in the first take. From the happy, swinging playing of the piano to the experimental “modal” jazz sound, Kind of Blue is a record that will continue to inspire artists for centuries. The term “Modal” explains the use of diatonic scales that do not necessarily fit a melody type. After this record was released, jazz musicians all over began to further their skill-set to learn more about this “modal” sound.

Known for its simplicity, Kind of Blue will forever be recognized as the best-selling jazz record of all time and will be always serve as an inspiration to jazz musicians. Miles Davis is a legend and one of the most important musicians of the 20th century.